Above: Tom’s wife Mary paddles aboard her Gougeon 12.3 kayak on the Rifle River Recreation area in Lupton, Michigan.

I recently modified the deck of my wife Mary’s fiberglass canoe (one of dozens built from the Gougeon 12.3 mold) to make it more seaworthy and to facilitate a spray skirt. More like a kayak. Previously, the decks covered only the ends of the boat, leaving the middle 40% wide open. I’m fairly pleased with how it turned out.

Plastic food wrap stretched over the bottom of the Gougeon 12.3 kayak hull to create a non-stick mold surface from which four fiberglass deck parts were made. 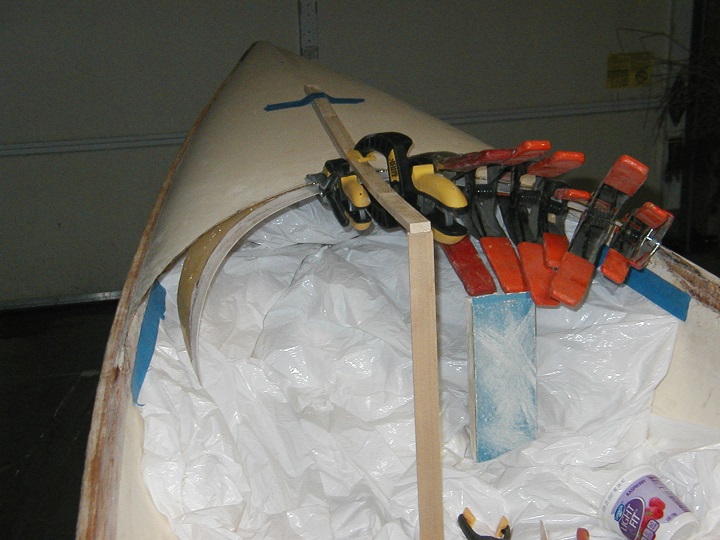 Gluing a fiberglass backer to the underside edge of the existing deck.

I’m thinking of making a quick mold off of the deck this winter so Gougeon employees can make the same deck for their boats if they wish. The original decks were made off of the bottom and near the ends of the mold that produced the hull. To extend these decks, I just made fiberglass parts off of the bottom of the boat, cut them to size, glued them in place, faired it all in, and painted. 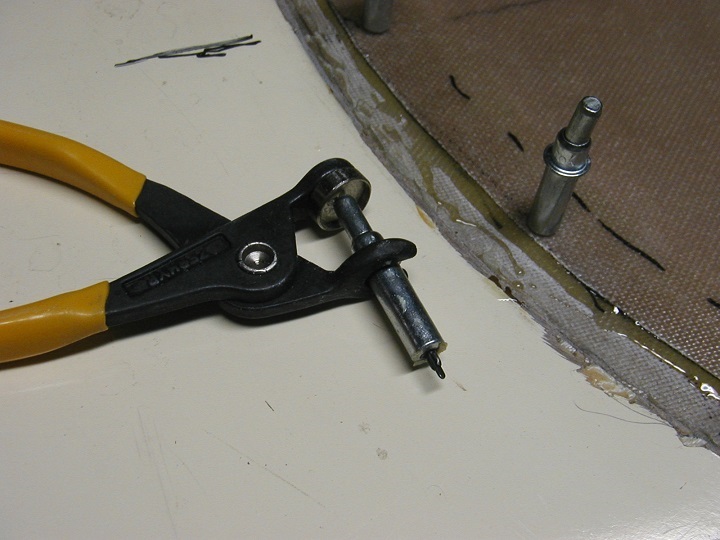 Close up of a Cleco clamp holding two panels together while the epoxy adhesive cures.

I borrowed a bunch of Cleco clamps and the Cleco tool that installs and removes the clamps to temporarily hold the pieces in place while the glue hardened. What a great invention. The aluminum skinned aircraft builders use them to position panels before final assembly. Cleco clamps are available from www.eastwoodco.com. 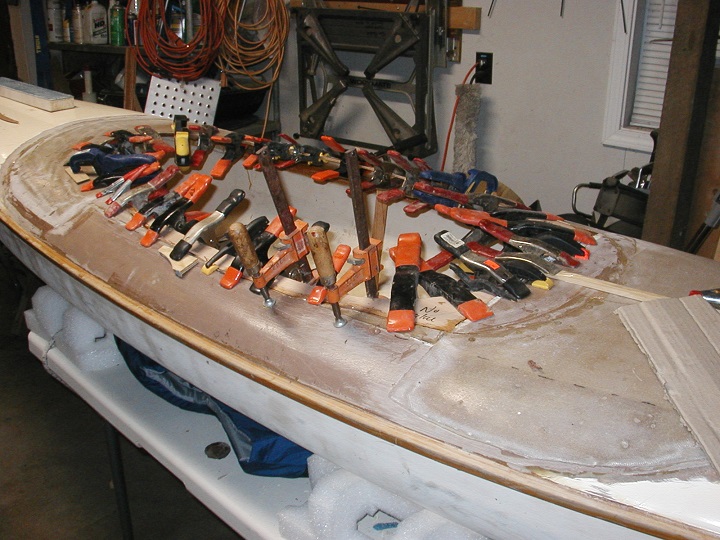 The four deck panels are installed and the 4mm plywood, under-edge coaming support is glued in place. The deck of the Gougeon 12.3 kayak was then faired and painted.

From this, I made two 10″-wide × 7′-long fiberglass panels (one from each side of the boat) from the turn of the bilge area (at the waterline) and centered along the length of the boat. These molded shapes became the deck along each side of the cockpit. Then I made a panel 3′ in from each end that extended from the turn of the bilge on one side to the other.

Fiberglass panels, molded from the turn of the bilge area, became the deck along each side of the cockpit.

These panels were used to extend my original decks that were about 3½’ long each. The panels were all glued together with lap joints of fiberglass and faired before being painted by brush with one-part polyurethane paint.