Most of the projects featured in Epoxyworks are neat and have a high level of finish. For a creation that will be put in the ocean and beat on with sticks, that seemed too high of a standard. When building the Unlimited Canoe, we instead opted for durability and fast construction, not to mention cheap.

The bulk of the canoe is made from cedar strips, resawn from siding boards taken from my house during a remodeling project about 20 years ago. The plywood for the stations was from a crate that had contained two surf skis from Italy (almost a full 3/4″ thick and very flat). We built it on a strongback that was also used in the construction of four previous canoes, although none was a full 45′ like the Unlimited Canoe. The expanded size of this canoe called for an additional 4’x8′ sheet of ½” plywood and two additional legs.

My partner in the construction project provided the workspace and sprung for the carbon fiber cloth, which adds to the boat’s strength. I bought the 7.5 oz glass cloth to cover the carbon fiber and provide a protective layer. We both contributed to the epoxy supplies: two containers of  WEST SYSTEM® 105-C Epoxy Resin with 207-SC Special Clear Hardener and 209-SC Extra Slow Hardener. The initial build—from beginning to first water test—took us from June 2018 to Feb 2019. All the glue up was with WEST SYSTEM Epoxy which we mixed in a very few plastic cups (once the epoxy is cured it releases easily from the plastic so the cup can be reused). We added symmetrical strips of wood at both keel and gunwales to even out any stresses that might occur if it was built one side at a time. Each station had the edges covered with masking tape and a strip of 1″ carbon tape stretched along it. My feeling is that this helps maintain the shape before the interior is covered with fiberglass fabric. 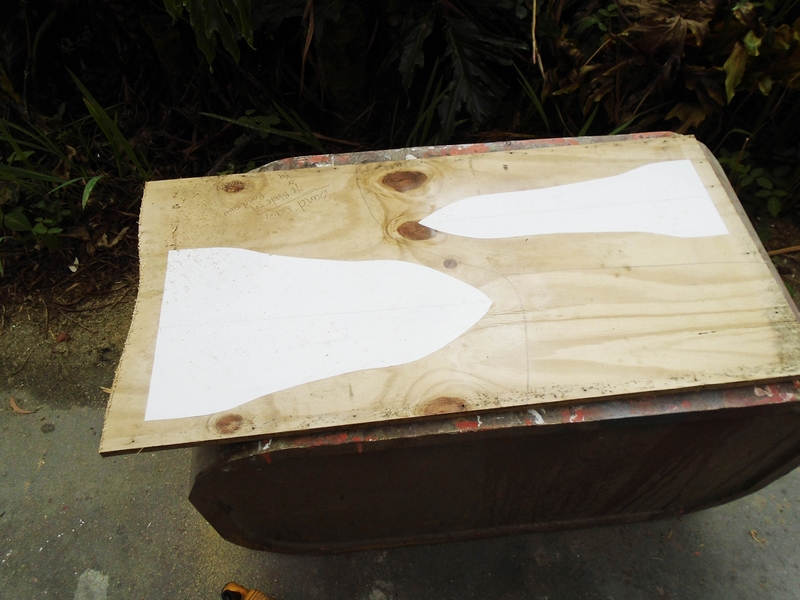 Templates for the strongback cut out of remnants of a packing crate. 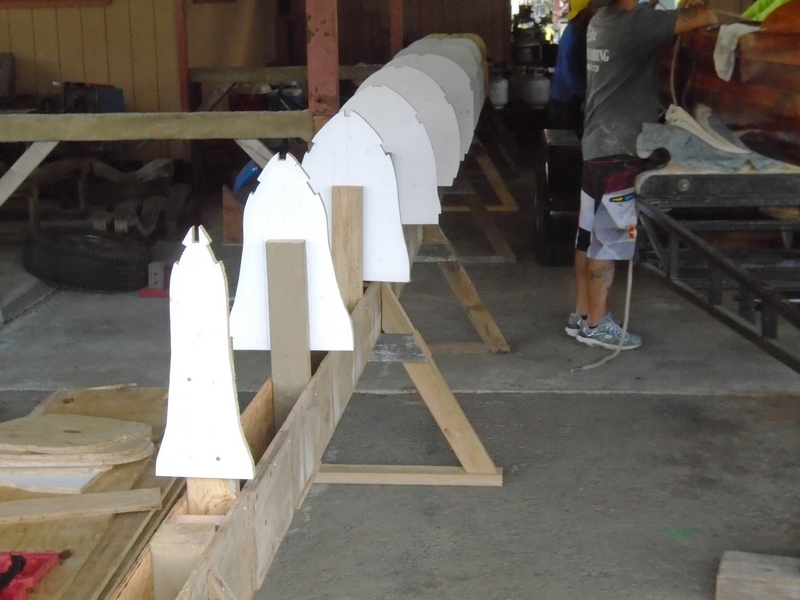 The strongback had previously been used to build four other canoes, however, stations were added to expand it to build the unlimited canoe. 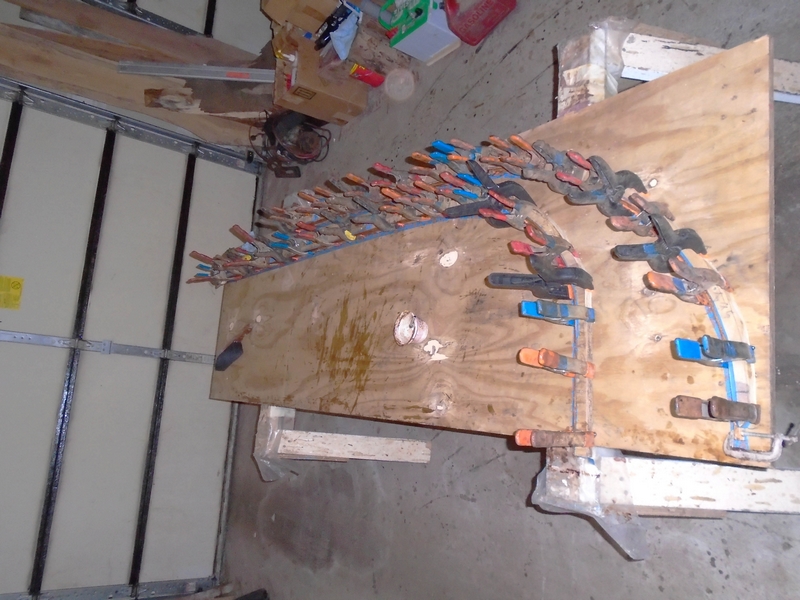 Laying up the keel.

We also reused our plastic cups and disposable brushes to mix quantities of epoxy for wetting out the wood structure before applying the fiberglass. After draping the dry fabric over the surface, we poured liquid epoxy over it and used a plastic spreader to saturate the cloth, with one person mixing the resin and hardener, and another doing the spreading. It may be as solid as a vacuum-bagged hull.

The good thing about epoxy is that someone can mix quantities of 4 or 5 pump strokes while someone else applies the epoxy. A bit of moisture clouding (Hilo, Hawaii is seriously tropical) can occur as the epoxy cures, but it’s not a problem for strength or cure time. For filler, we mixed sanding dust from the 120-grit belt sander as needed.

Initially, we had the ama at the very front of the canoe until torsional rigidity proved a problem and we’ve since moved it back. But, the ama is still forward of a typical six-person outrigger. Currently, we are playing with a hydrofoil on the ama and we have considered mounting a sail rig.

The Unlimited Canoe has been used regularly in practice with paddlers 10 to 14 years old who tend to beat on the watercraft a bit. There are seven seats because no one had a good concept of the balance for six paddlers. The seventh seat allows an adult to coach the six-person crew.

The boat is named ‘Alala after the Hawaiian crow, which is also very black. All-up weight is about 320 lbs., which is about 80 lbs. less than the 400 lbs. typical for a Hawaiian outrigger canoe. 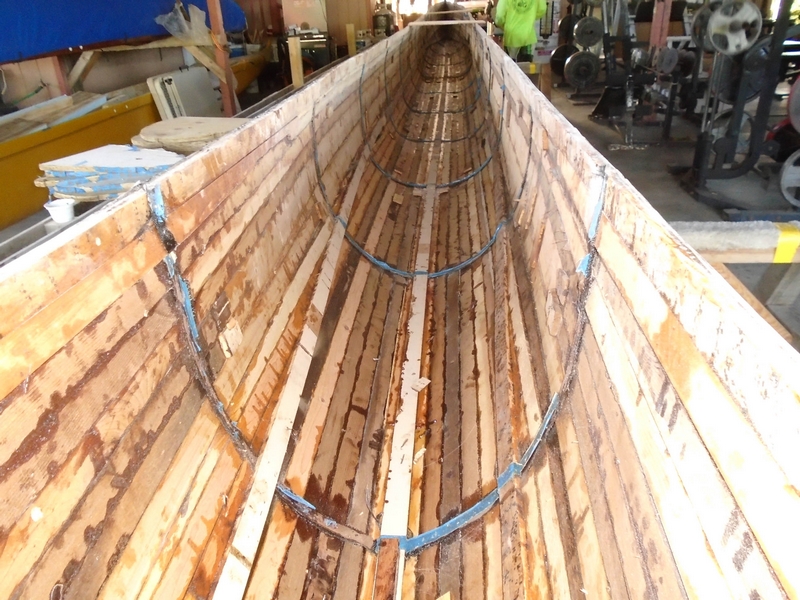 Inside of the unlimited canoe showing the cedar strip. 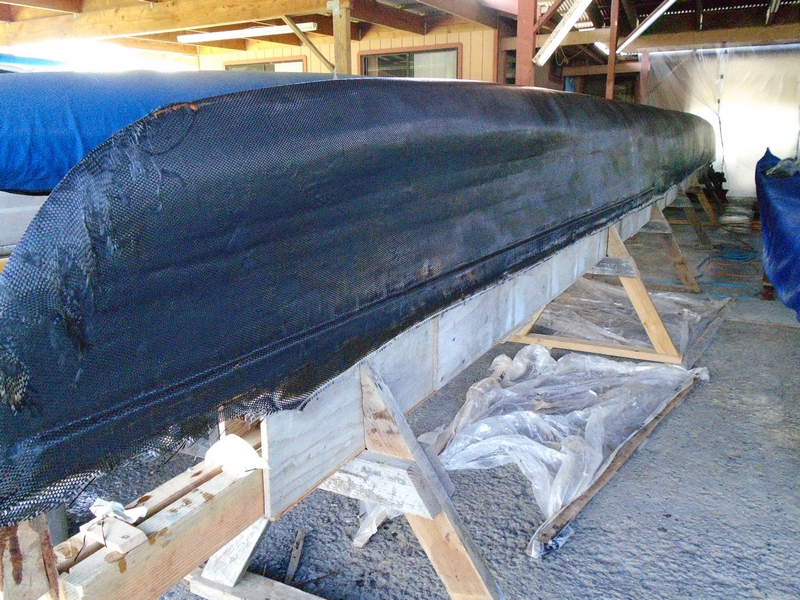 The canoe was covered with a layer of carbon fiber to help give it rigidity, followed by a layer of fiberglass for protection. 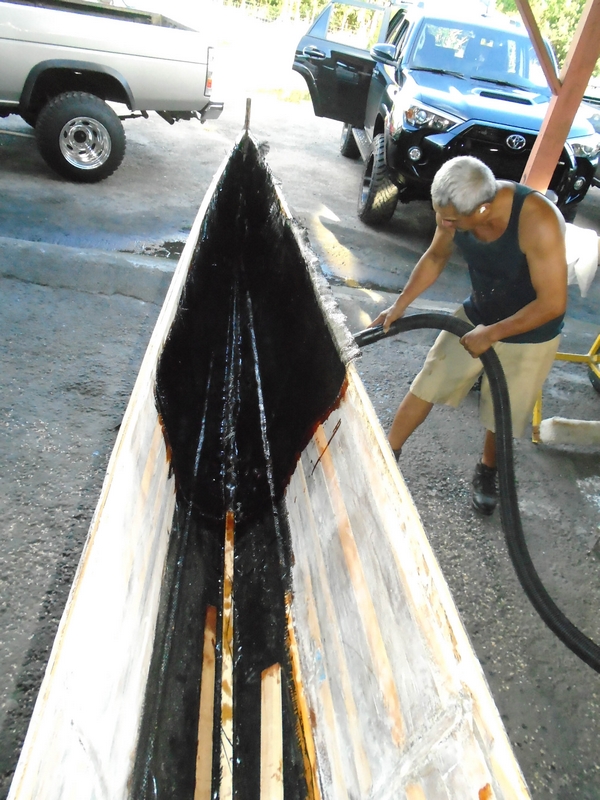 The inside of the canoe also had some carbon fiber reinforcement covered with a layer of fiberglass.