I begin a two-part series that will feature a custom boat project being built by Van Dam Custom Boats in Boyne City, Michigan. We featured a Van Dam-built boat in Epoxyworks 14, the beautiful and unique Alpha Z. We want to give our readers a glimpse into what is currently happening at this world-class boat shop.

I traveled to Boyne City in early May and was graciously greeted by Steve Van Dam, the owner and founder of the company. We chatted as Steve showed me around. He introduced me to the guys working on various projects including a modified Sandbagger sailboat and a 32’ VZ custom powerboat reminiscent of Alpha Z.

We then went into the room where the Limousine was sitting. There were a couple of guys working diligently on it installing one of the engines and fitting other various components. There certainly is no moss growing under anyone at this shop. Steve expects the boat to be completed and launched fairly early this summer. But this story begins much earlier, in autumn of 2014. 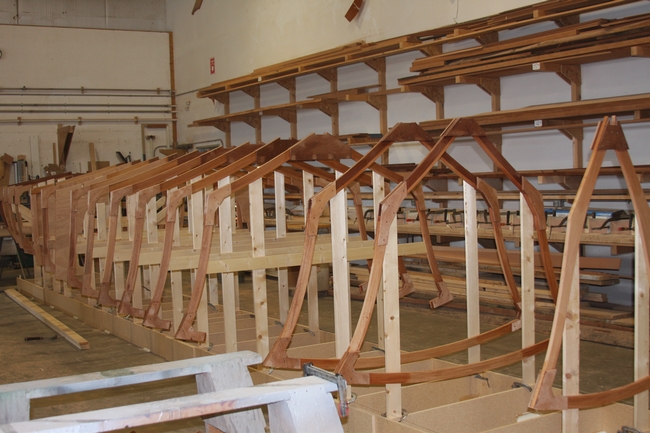 The limousine build begins by constructing a strongback and ladder frame. Steve explained that they like this method because it quickly allows for the station frames to be installed, squared, and the basic hull shape in place. 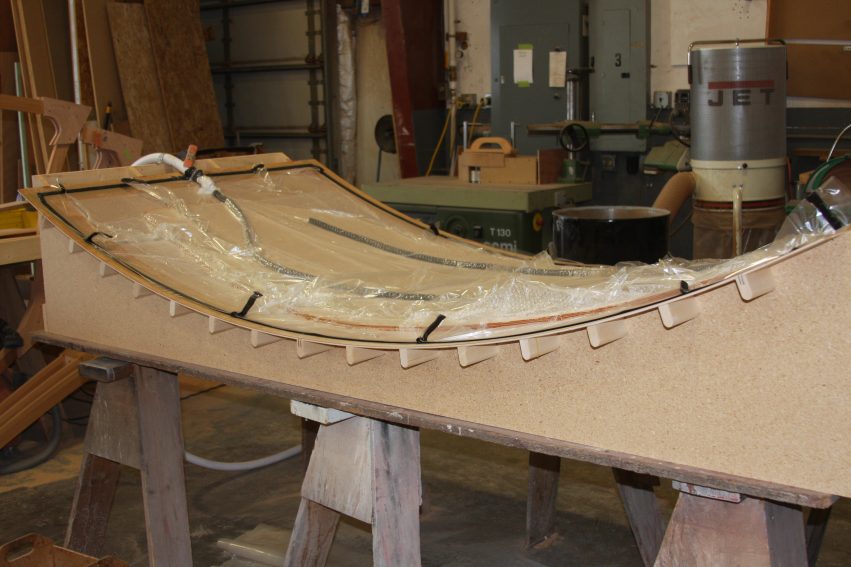 Always multitasking, while the station frames were being installed the Limousine’s transom was being laminated and vacuum bagged in a jig. 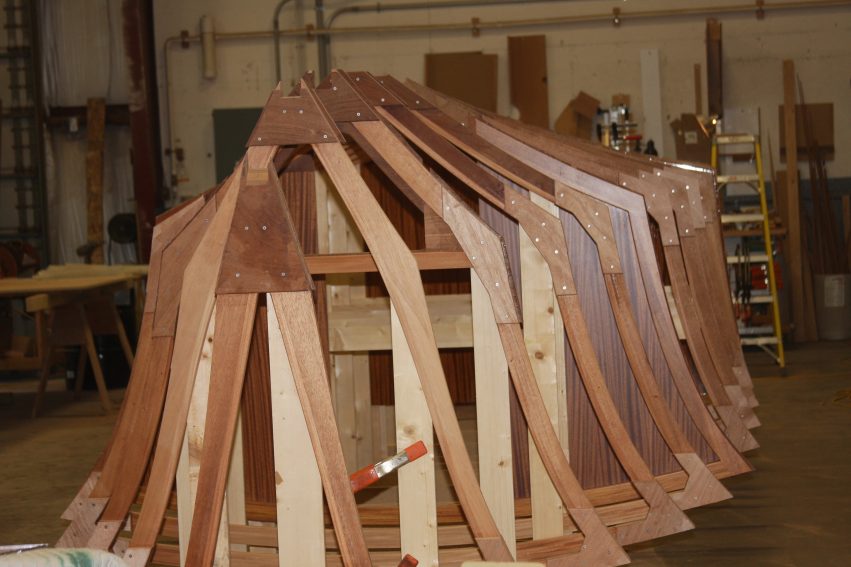 This is a view from the bow with all the frames in place. The Limousine is now ready for installing the keelson, bulkheads and spreaders. 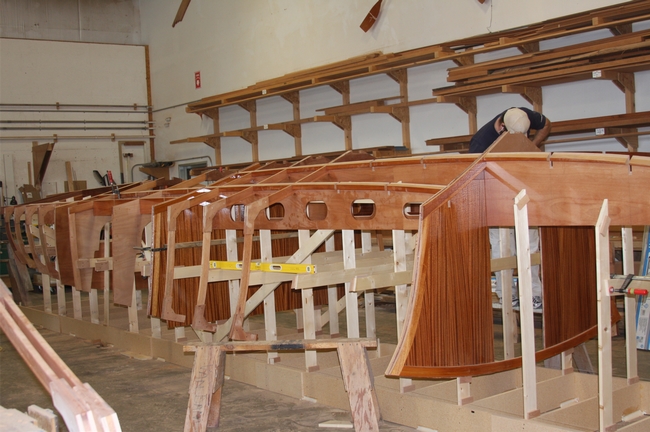 We see here the bulkheads and “girders” installed viewed from the port side. There are two girders (stringers) mounted 1’ off-center on both sides. Notice the guy working on the installation – his head is where the keelson will go along the centerline. The frames are removed to install the girders. The permanent bulkheads are also in place. 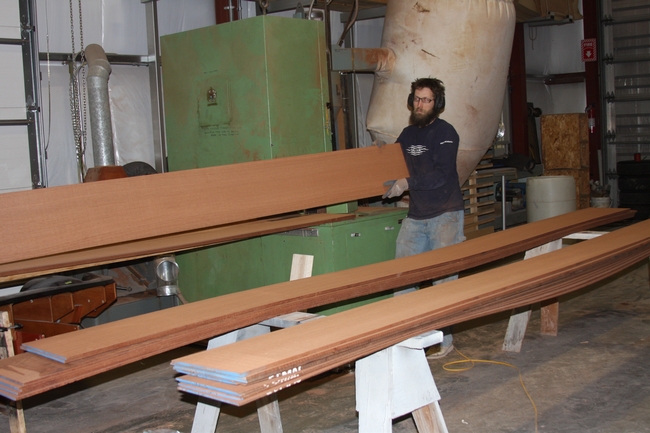 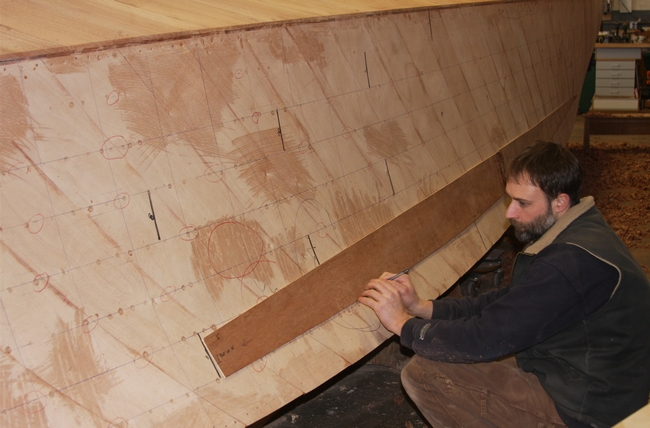 With the bottom and the show planks glued on, the stain is now hand-processed prior to the application of a clear coat using West System® 105 Resin and 207 Special Clear Hardener to protect the hull during the rollover process and while the build continues. 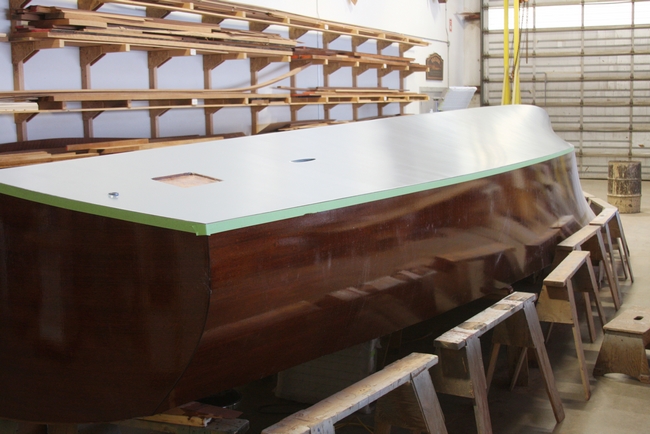 The rolling of the “Van Dam Limousine” begins. Large eye hooks fore and aft are used to secure the belts during the roll. Steve Kim and Michel Berryer control the boat as it’s rolled. Now that the boat is right side up, interior structure and deck framing are fitted and installed on the Limousine. You can see the bulkheads and battens that were installed while the boat was upside down. 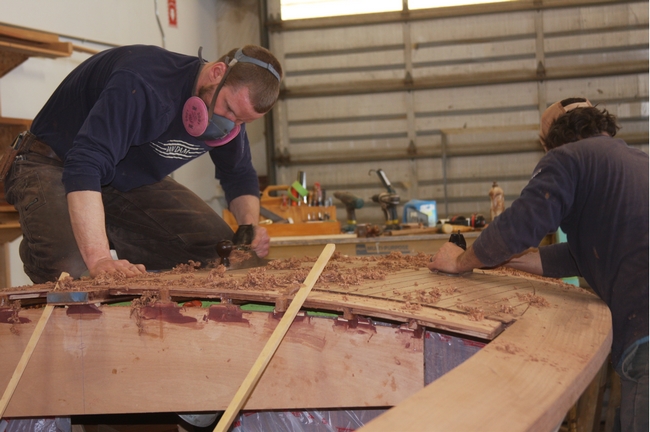 The deck consists of ¼” plywood glued to the deck frames followed by mahogany deck strips. In this photo, you can see both the plywood underlayment and the mahogany decking as it gets planed smooth by Ben Van Dam and Chad Buras. 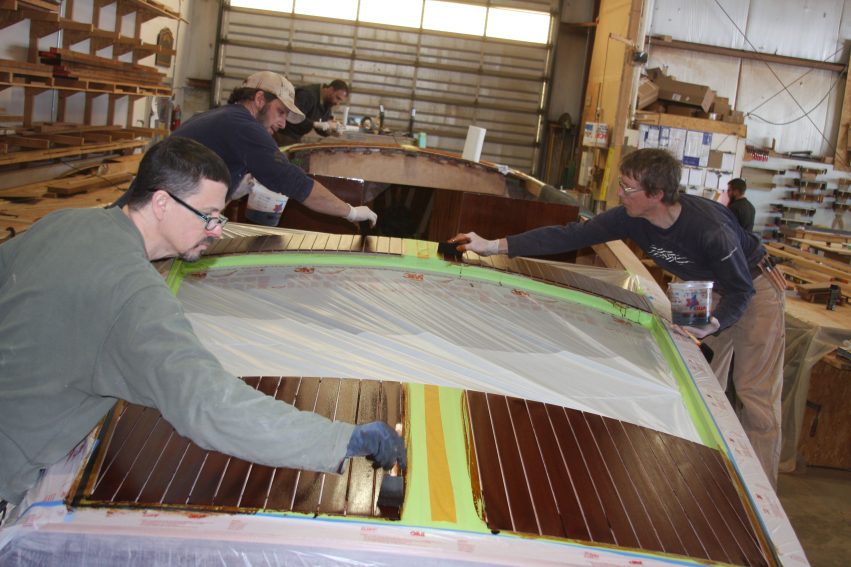 The Van Dam crew all apply stain to the Van Dam Limousine by hand to get it done quickly. Steve hires graduates from The Great Lakes Boatbuilding School in Cedarville, Michigan; The Landing School in Arundel, Maine; and the Northwest School of Wooden Boat Building in Port Hadlock, Washington. Each of these schools turns out quality trained boat builders and each has been featured in an Epoxyworks article. Hard at work staining are Trevor Brazell, Dave Snyder, and Chad Buras. 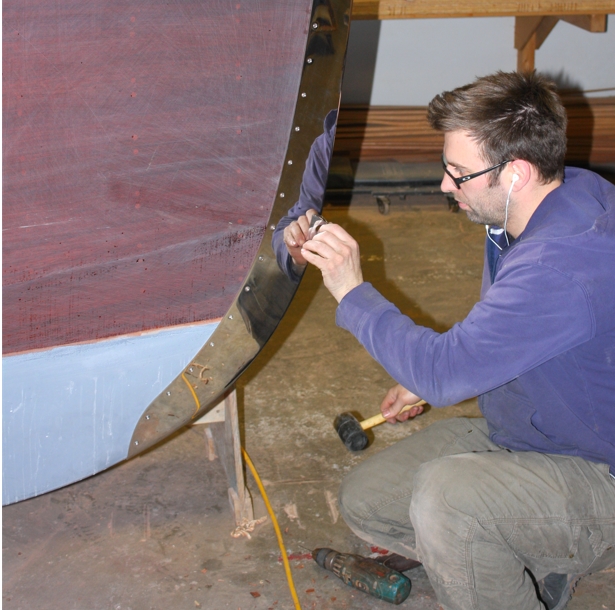 To finish part one of this two-part series, I’ll end with a photo of a custom-built stainless steel Cutwater built in the Van Dam metal fabricating shop, a fairly new addition to the business. Jess Brown checks the fit during installation.