If you were to inquire about the physical properties of WEST SYSTEM® epoxy, you’d receive a physical properties data sheet. To some, the information is very meaningful, but I was having a hard time figuring out what all those tests and numbers meant and how they applied to my projects. After I found out for myself, I decided to write an article explaining how the tests are performed and what the resulting numbers mean.

When looking at test results, it’s important to remember that sometimes apples are not being compared to apples. Test result values from one source may conflict with those from another. This can happen when discrepancies in the test specimens are not taken into consideration. We test our epoxy materials in neat form, which means we don’t add fillers or reinforcing fibers. But you may run across data based on epoxy test specimens which included reinforcing fibers. The numbers on a reinforced epoxy would be much higher than the numbers on an epoxy tested “neat.”

When discussing scientific specifics in lay terms, definitions can be confusing. The engineers here at Gougeon Brothers have pinched my nose more than once over my misuse of terms. So we’ll define the terms as needed as this article progresses. The tests are described in the same order they appear on the physical properties sheet. Mix Viscosity, ASTM D-2393, is measured using a viscometer, where a spindle is rotated in the epoxy fluid. The fluid’s resistance to flow is accurately measured in centipoise (cPs). The lower the centipoise number, the thinner that material. For example, water has a viscosity of 1 cPs, while syrup has a viscosity of several thousand cPs. The test is conducted at 72°F. A material’s viscosity is greatly effected by temperature modification. (See chart on page 10). Thick resin doesn’t easily pass through dispensing pumps and is much more difficult to mix thoroughly.

Viscosity is most relevant in determining an epoxy’s ability to wet out a material. Low viscosity epoxy wets wood and improves adhesion to it. It also promotes aggressive wet out of synthetic fabrics. If the epoxy is too cool when applied, its viscosity will be high and wet out performance will be decreased. Also, when cold it is difficult to apply in a thin film, and you’ll end up with sags in the coating.

Pot Life, ASTM-2471, 100 grams of epoxy is mixed at 72°F for two minutes. Timing begins when you start mixing, and the test is completed when the material gels (just begins to turn solid). The time is noted in minutes. See  Shelf Life for an easy way to conduct a valid version of this test yourself.

Pot life refers to a specific test, but the term is often used loosely to describe the time the mixed epoxy remains usable. As epoxy users know, liquid epoxy you’re using on a project seems to turn solid quite suddenly. To extend pot life, pour the epoxy into a roller pan to increase surface area.

Hardness (Shore D), ASTM D-2240, using a durometer (a precision spring deflection gauge) the hardness of the cured epoxy is measured by forcing a metal point into a slab of cured epoxy. A numerical reading registers the materials resistance to penetration by the point. The term “Shore D” describes the specific range of the test. A different range is used for steel. Because hardness increases with degree of cure, the test is conducted at one day of cure, then at 14 days of cure at room temperature. You may hear of Barcol as another test used to describe hardness. Barcol has a smaller range than Shore D, and we feel it is generally less sensitive than Shore D. Results of a hardness test are important for comparative purposes or determining degree of cure.

Temperature is a major variable which affects both liquid and solid epoxy.
At room temperature, plastics (including cured epoxy) are elastic, meaning shape and size can be changed through force. But the original shape will be recovered when the force is removed. However, at elevated temperatures, plastics can be viscoelastic, meaning original shape may not be recovered, resulting in permanent deformation. The following tests are designed to measure this behavior.

Compression Yield, ASTM D-695, a cylindrical piece of epoxy is placed between the platens of a test machine. The load required to cause plastic deformation is measured in pounds per square inch (psi). Plastic deformation is the permanent change in shape or size of a solid body without fracture, resulting from the application of sustained stress beyond the elastic limit. Because hardness increases with time, the test is conducted at one day of cure, then at 14 days of cure at room temperature.

The compression yield value is important to know if you plan to cast an epoxy spacer under a compression member, such as a mast step.

Tensile Strength, Tensile Elongation, Tensile Modulus, ASTM D-638, are all tested with the same type of specimen and the same test procedure. The test specimen is made in the form of a standard dumbbell. When tested, under defined conditions of temperature, the specimen is fixed on each end in the jaws of a test machine and loaded with steadily increasing pressure until failure. Some materials, especially plastics, deform considerably under load and may cease to carry load yet not fail catastrophically (imagine a test sample of bubble gum). The value recorded in p.s.i. is the ultimate load the specimen carries rather than the load at actual failure. This figure is the Tensile Strength of the material.

Tensile Modulus describes the amount of stretch (strain) in relation to its ability to resist stress. A material’s modulus concerns its elastic zone rather than its ultimate or failure point. High modulus materials strain less for a specific amount of stress applied to them than do low modulus materials. Because of the high values (large numbers) possible, modulus numbers are usually expressed in scientific shorthand, such as 4.68x10E5, which equals 468,000 psi.

More and more parts that used to be made from metal are now made with composites. These values, in addition to flexural strength and modulus values, can help you calculate the required cross sectional areas and safety margins.

Flexural Strength and Flexural Modulus, ASTM-D-790, a rectangular-sectioned bar of epoxy is subjected to a three-point bend test. The amount of stress necessary to cause the bar to fail is measured in psi. Also, the amount of strain versus the stress (modulus) in the elastic range is evaluated.

Heat Deflection, ASTM D-648, a rectangular-sectioned bar of epoxy is subjected to a three-point bend test. The bar is immersed in oil and a constant stress of 264 p.s.i is applied in a three-point bend configuration. The temperature of the oil is then gradually raised until the bar deflects 0.1 inches and the temperature of the oil is noted. This is the heat deflection temperature (HDT) of the material, measured in degrees Fahrenheit.
If bonded parts are stressed when they are at or near their HDT, some dimensional changes or failure may occur.

Annular Shear Fatigue is a Gougeon Brothers-designed test. We felt this type of test was needed because none of the ASTM test procedures fully addressed the fatigue issue of epoxies in a manner we felt relevant. Fatigue performance was especially important to our wind turbine blade development. The test consists of a two-inch diameter epoxy annulus cast around a central threaded steel rod. The steel rod is positioned so that one end protrudes from the epoxy annulus while the other end is recessed. This allows an axial load to be applied to the exposed end of the threaded rod and reacted by the epoxy in shear through the many thread peaks to the machined base of the annulus (top photo). The MTS test machine actuator operates at 2.5 cycles per second. The test results are given in the number of pounds to cause failure at 100,000 cycles.

This value is relevant when mechanical fasteners are used in a high stress, cyclic environment, and is most useful in comparing epoxy systems.

Izod notched impact, ASTM D-256 A square-sectioned bar of epoxy with a notch cut into one surface is supported in a vice-like fixture. A weight on a pendulum is swung, hitting the epoxy specimen on the opposite surface of the notched face. The amount of energy required to fracture the epoxy is measured. The value is described in the number of foot/pounds of torque the pendulum exerted to cause failure, divided by the specimen’s depth in inches.
None of these tests are simple to perform or to interpret, but we feel that all the data is crucial to predicting design performance. The test results help yield a well rounded description that we hope assists our customers in trusting the reliability of WEST SYSTEM Epoxy. 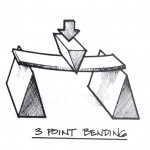 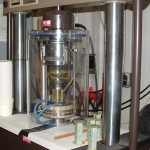 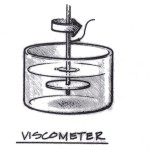 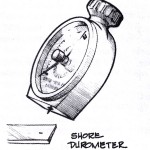 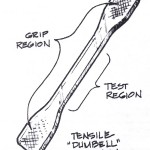