Small communities benefit when local groups work together to produce results greater than the sum of their individual efforts. Three organizations combined their efforts to create such synergy in a coastal county on Lake Huron. The Iosco County Family Court, local Elks Lodge 2525 and Heritage Coast Sailing and Rowing (HCS&R) combined efforts to develop a positive training program for youthful offenders and provide a staunch safety boat for the new not-for-profit sailing school.

The Juvenile Enhanced Accountability Program (JEAP), a Family Court Program, gives youthful offenders a chance to complete their court-ordered community service, in this case, by building a boat while increasing their manual and group skills. Elks Lodge 2525 has a long and laudable community service history. They have worked with the JEAP program for several years providing funding, project identification, and adult supervision.

Heritage Coast Sailing and Rowing, a 501(c)(3) not for profit, was expanding its community boatbuilding program to include a sailing school operating on Tawas Bay and needed a safety/coaches boat. The boat needed to be safe, stable, have a two-crew capacity (crew, plus up to five rescued from the water), be easy to get in and out of, and be built by a moderately skilled crew.

A Working Boats UK Ltd. designed plywood/epoxy kit boat, the Workstar 17, met the criteria. It was being used by police departments, towboat companies, and outdoor education schools. The group purchased an instruction license. Hewes and Company of Blue Hill, Maine prepared the kit.

Five general activities were involved in the building process and are summarized by the photographs. The designer’s instructions provided an excellent step-by-step guide.

The kit arrived as 20 sheets of plywood with the individual parts nested and tabbed in the sheets. Each piece was first labeled, then carefully cut out and set aside in sub-assembly groups. 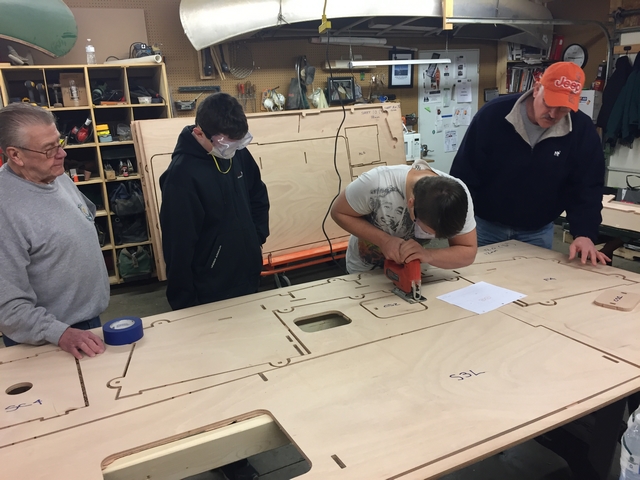 Pieces were labeled and then grouped for easier assembly. 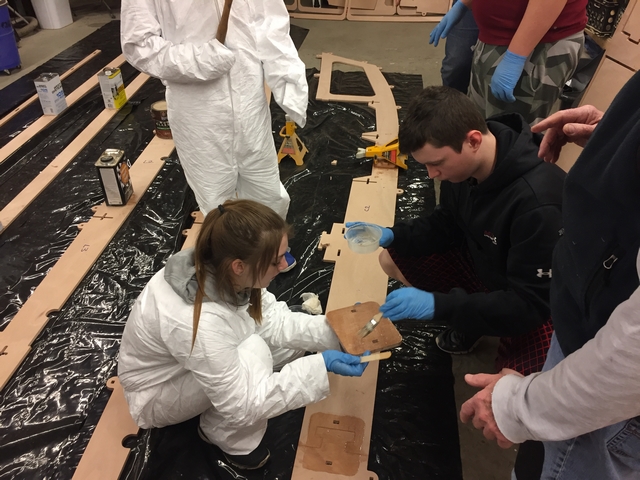 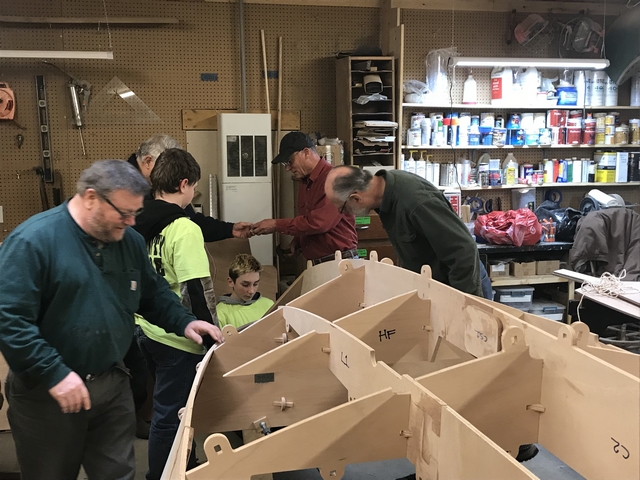 Epoxy wetted T-pegs were driven into the slots through the but straps and into the parts being joined, ensuring vertical alignment as well as strength.

Parts assemblies that run the length of the boat were built on the shop floor because it was relatively large and flat. The boat’s sides, bottom, longitudinal stringers, and rub strakes were all done in the same way. Each sub-assembly was first dry-fit, then the joint edges and butt strap areas were coated with unthickened WEST SYSTEM Epoxy. This was followed by a coat of thickened epoxy. Epoxy wetted T-pegs were driven into slots through the butt straps and into the parts being joined, ensuring vertical alignment as well as strength. Weights were used to ensure horizontal alignment.

Temporary legs were attached to two frames to obtain a good working height. After dry fitting, the longitudinal stringers, the sides, and bottom were added utilizing tabs, slots, and a wedge system. Locking pegs ensured good alignment. Bottom and side seams will later be armored with 17 oz. glass tape and the entire bottom will be clad in 10 oz. glass fabric. 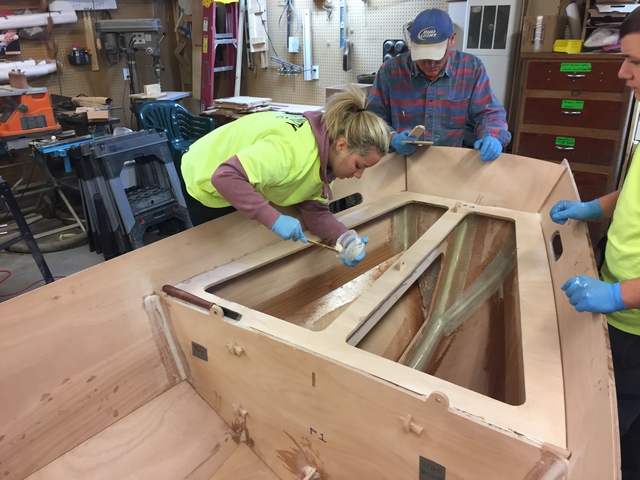 Fillets were applied along the joints along with 17 oz. fiberglass tape for reinforcement on major joints.

The hull was turned over and extensive epoxy fillets added to the egg-box structure. Major joint fillets were also strengthened by 17 oz. tape. The sole, seats, and control console were added again using the tabs, slots and wedge system. 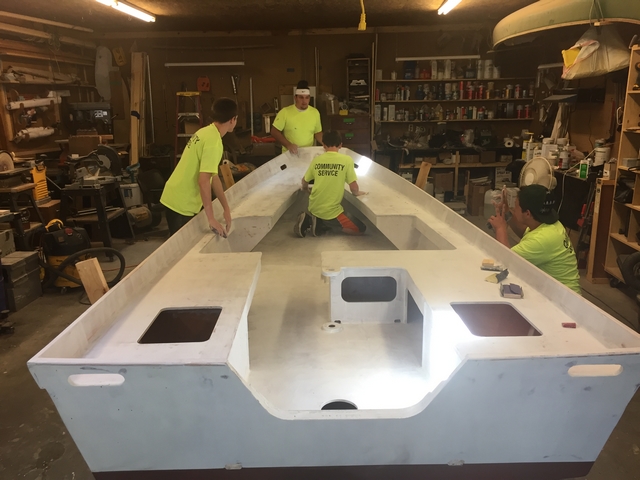 Primer being sanded before final coating.

The entire boat was covered with two coats of WEST SYSTEM before the finish coats of two-part primer and paint were applied. The youth named the boat Morning Sun and chose its colors, the colors of a sunrise.

Building the boat was a powerful lesson for the youth involved. They followed a plan that converted a pile of plywood and strange-looking parts into a well-built, functioning boat. They witnessed and participated in countless decision-making discussions, all very calm and focused on the outcome. They learned how to work together in tight quarters. They became proficient in the use of several hand and power tools. They saw the benefits of cooperative effort and synergy.

The three groups worked together to successfully build a second boat from scratch, a 1944 Lowell Coast Guard dory. All have expressed interest in maintaining the collaboration and continuing the program and relationship for interested, youthful participants. 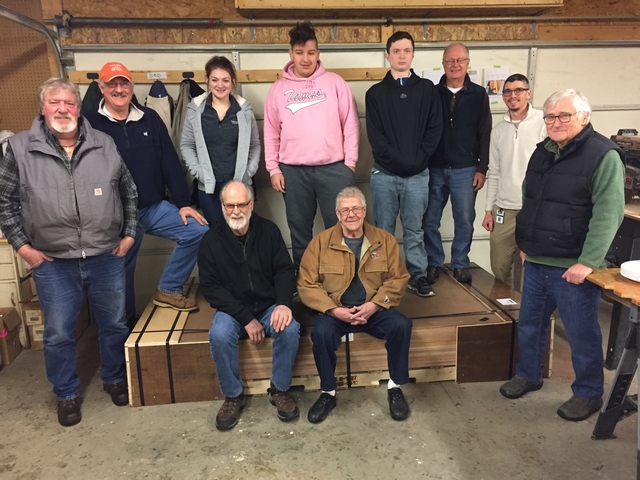