In 2015, two things happened that changed my direction. First, I started to get help with the mowing, which allowed me more time to work on the damaged monuments. Second, I started probing the ground and found several tall obelisks (up to 81″), two of which were broken in two. 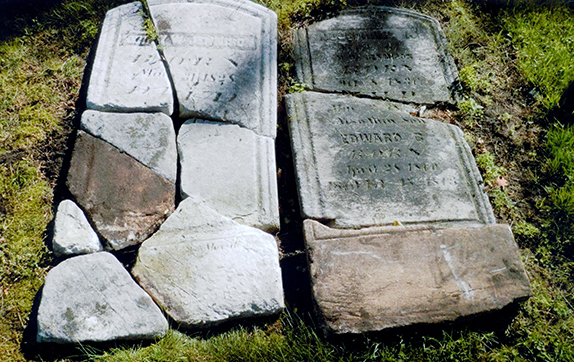 Toppled headstones in the cemetery in need of repair.

I began searching for a way to repair the breaks and found WEST SYSTEM Six10 Thickened Epoxy Adhesive. Before trying it, I talked to Gougeon Technical Service and confirmed that it would be appropriate for cemetery monument repairs. After my first couple of repairs, I was satisfied.

While I was working one day, a man was looking around the cemetery. I asked if he could use some help finding a grave and he said yes. As it turned out the man was one of the founders of Gougeon Brothers, Joel Gougeon, and he was looking for a Civil War veteran who was his great-great-grandfather. I showed him the gentleman’s monument and asked if he’d like to see what I had accomplished with the Six10. He took some pictures of the repair I showed him and asked me to go with him to meet his brother Meade Gougeon, which I did.

From then to the present, Gougeon Brothers, Inc. has supplied the epoxy which I have used to repair approximately ninety headstones. I’m not finished repairing all the monuments; however, I’m nearing the end of this large cemetery which was abandoned in 1931. It’s looking quite good. But when I stick the probe into the ground I never know what I will discover that needs repair next.

When assembling the stone pieces, I lay them out and mark the points of contact. The next step is a good cleaning, including wire brushing to eliminate any loose or soft surface material. Next, I use acetone to clean all surfaces to be epoxied. When all is ready, I apply Six10 in a ring on one surface. Then I seat the pieces together and clamp them. This squeezes the epoxy into all of the cavities. I also use Six10 to bridge gaps as needed for strength.

To finish the project, I make what I call fake marble by mixing pulverized marble with WEST SYSTEM 105 Resin and 206 Slow Hardener. This makes a thick paste which I use to fill all holes, gaps, and grooves to match the surface. To match the color, I add WEST SYSTEM 501 White Pigment.

When I started this project I was working alone, but now we have a 501 (c) 3 non-profit organization called Friends of Pine Ridge Cemetery. 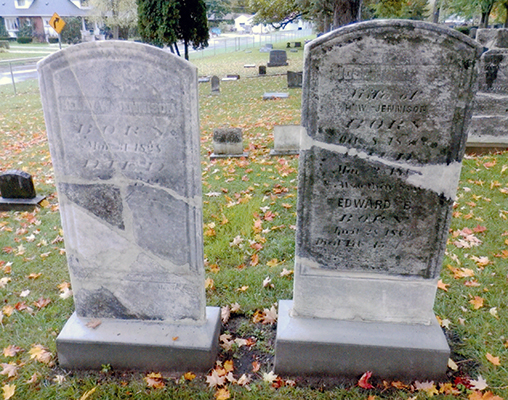 The headstones repaired and reinstalled.