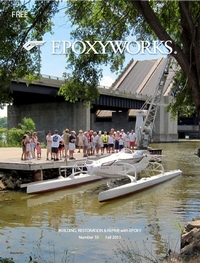 In Epoxyworks 17, we published a photo with the following caption: In the recess of the Gougeon boat shop loft, something unusual is taking shape out of plywood, foam, carbon fiber, and epoxy. There is a minimum of plans and drawings. It evolves, piece by piece, mostly from its creator’s head. It’s not a trimaran. Not exactly a catamaran. Technical you probably wouldn’t call this a hull. It’s more of a fuselage. (There is an aircraft canopy involved.) For now, let’s call it Project J. We’ll keep an eye on this project in coming issues and see what develops. 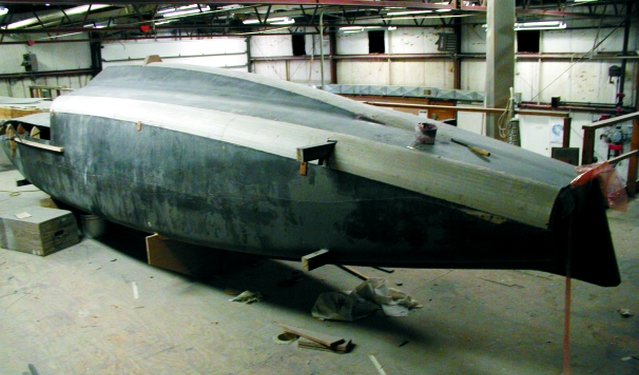 We published this photo in Epoxyworks 17 under its original nickname, Project J. It later became Project X, and when completed was christened STRINGS.

Project J, later upgraded to the nickname Project X, was christened STRINGS. Jan’s goals for his “folding cat with a fuselage” were that it be easy to sail solo or double-handed, self-righting, trailerable, with a shallow draft, and have a big enough footprint to be a serious offshore contender. The most important criteria? “You don’t have to be a spring chicken to sail it,” Jan said. 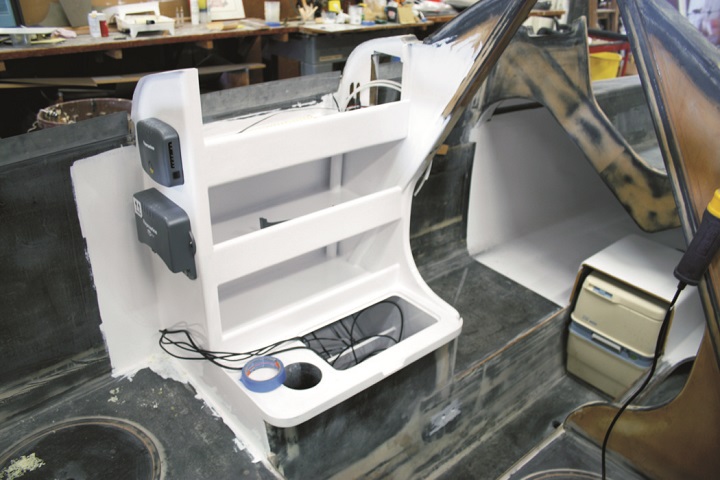 Interior galley area looking aft toward the two bunks under the cockpit. The interior was coated with white tinted epoxy before the deck was installed. 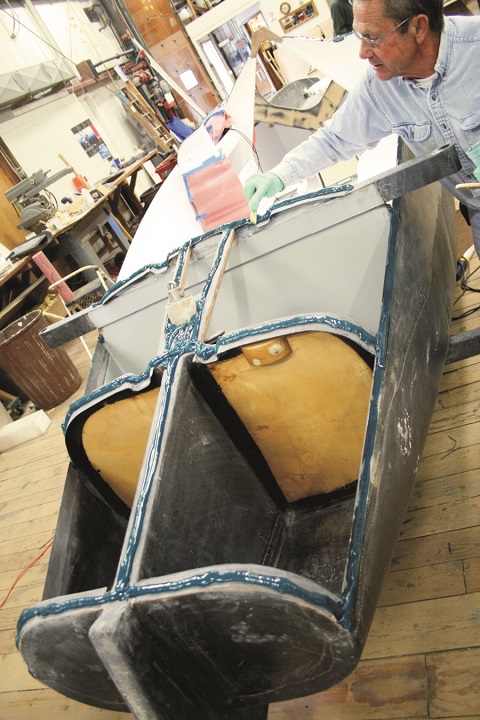 Jan applies thickened epoxy adhesive to the tops of the bulkheads and side fuselage skins before the deck is installed. The main bulkheads were 1/16” plywood over 1″ foam with interior wood trusses, covered with carbon fiber skins. Heavy bulkheads have an additional three layers of carbon on each side. 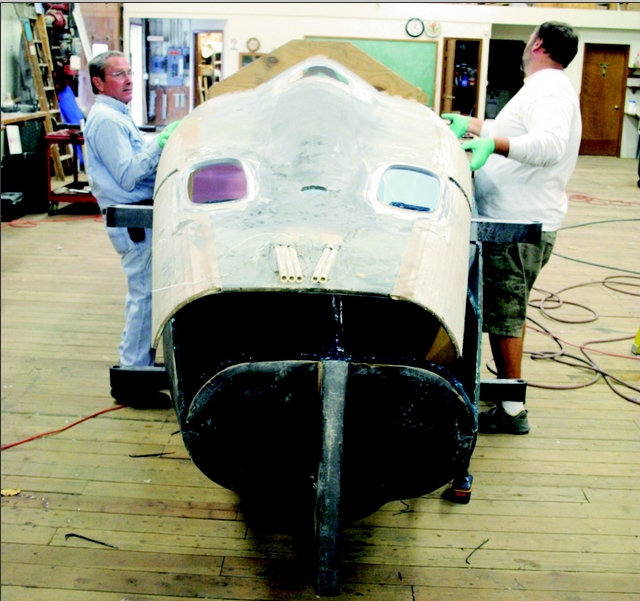 Jan and Greg Bull carefully place the deck skin over the front of STRINGS’ fuselage.

STRINGS meets all of Jan’s goals, from the sleek pair of 39′ 7″ foldable hulls flanking the fuselage, which rides high and dry about 2′ above the waterline, to the soon-to-be-made roller reefing mainsail and roller furling/ reefing jib. When folded for trailering, the boat is just over 8′ wide. The fuselage is small but has an effective galley. Jan said the cabin “Can sleep four very friendly people with enough room left over for each to bring along a toothbrush and a sandwich.”

Jan fitting thin bulkheads to support the cockpit seatbacks. These carbon/plywood panels made stiff, light building blocks. The lightweight fuselage skins were built of 1/2″, 7 lb per cubic foot foam with a layer of carbon oriented at 45° on each side. The corner pieces were laminated over a section of 12″ PVC pipe and the deck, sides, and bottom pieces were laminated in a generic curved female mold. Jan trimmed, bent, and stitched together these basic panels over the lofted frames and bulkheads that were mounted to a strongback. Years later, when the fuselage was assembled to its final shape, another layer of carbon was applied to the exterior. Extra layers of carbon were built up at key structural areas.

Single and double-handed sailing are accommodated by the roller furling sails, self-draining fuselage, easily filled and emptied water ballast in the hulls. From the rigging to the hulls, to the ballast and the rudders, everything is controlled like a big marionette by lines to the cockpit—hence the name, STRINGS. 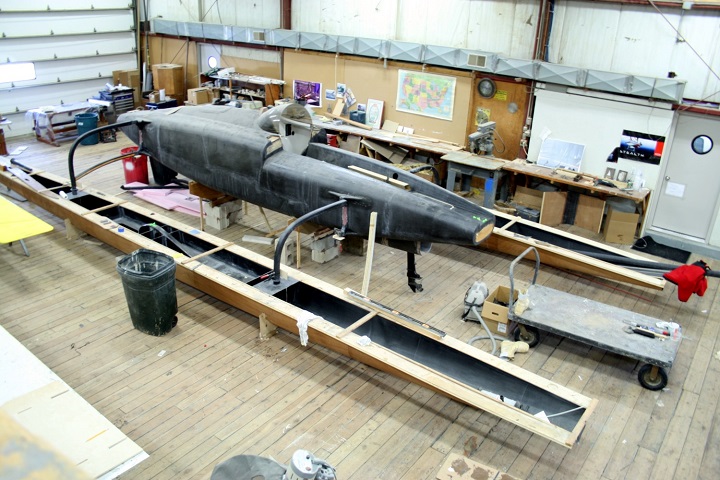 By early 2009, STRINGS’ hulls had taken shape and the connecting arms were being built. 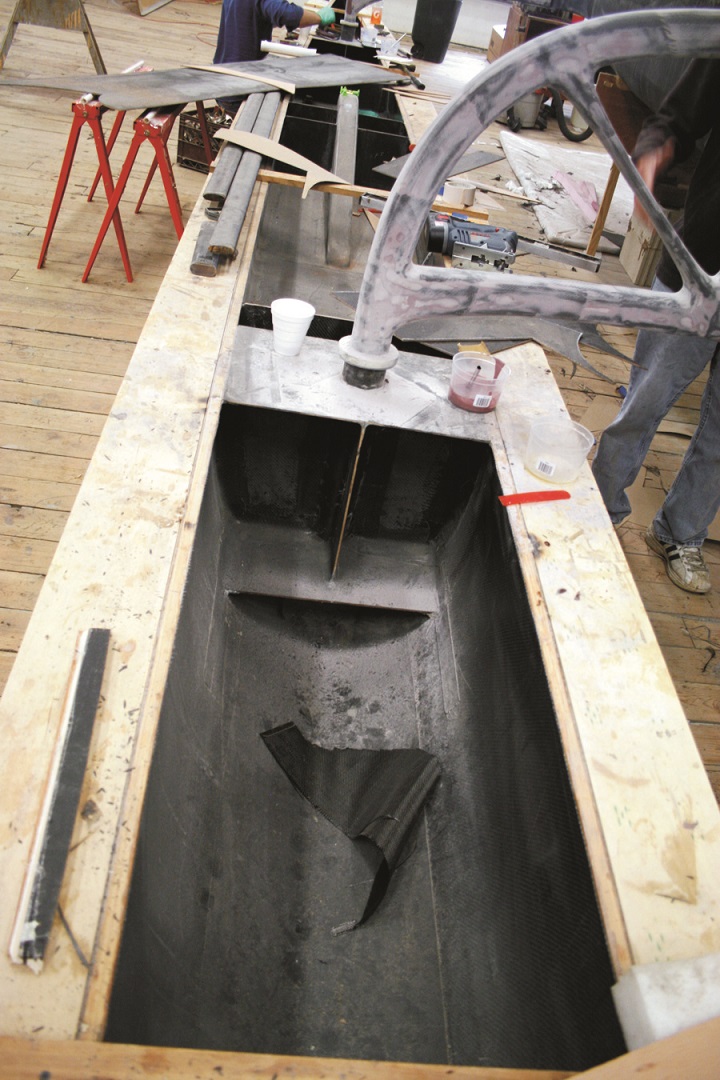 The port hull’s forward ballast tank before the deck is installed. Two small dinghy bailers, one facing forward and one facing aft, are mounted at the bottom of each tank. The forward motion of the boat fills and empties the tanks when the respective bailer is opened via a line from the cockpit. A hull can take on half a ton of water ballast in a matter of minutes, very useful for a 40′ catamaran that is only 14′ wide. Water-ballasted hulls had proven themselves in the earlier Gougeon G-32 catamaran design.

Some favorite design tricks included on STRINGS are kick-up rudders. “It was always easier to build those than to learn to navigate,” joked Jan. Water ballast was also used on Gougeon’s G-32 catamarans, and self-righting has been a staple of Jan’s multihull designs ever since his trimaran Flicka turned turtle in the Atlantic during an OSTAR qualifying race over 30 years ago. Jan survived four days in Flicka’s overturned hull contemplating multihull design before a passing freighter rescued him. STRINGS goes about 9 mph with its 6 hp motor which when needed, tilts down out of the bottom of the fuselage. At this speed the forward ballast tanks in each hull will fill with 850 lb of water in about 7 minutes. The rear tanks will fill with 150 lb of water in about 2 minutes. With gravity on their side, they drain much faster. 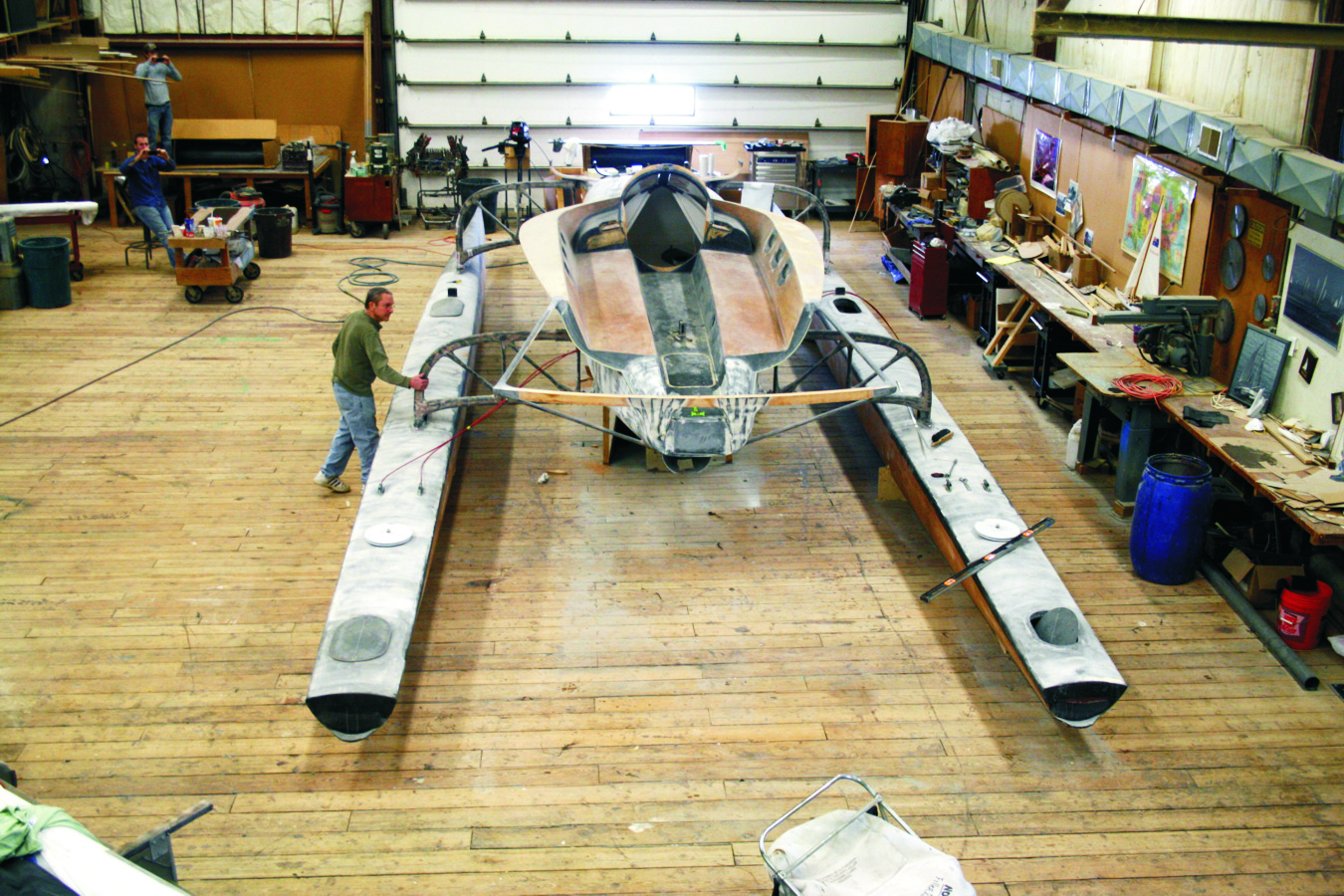 With the fuselage supported, Jan demonstrates the folding hull, Open to its full 14′ width (left) and folded against the fuselage (right) to a trailerable 8’—when both hulls are folded. With all of the components in place, the exterior was filled and faired with epoxy/410 Microlight®. Weeks of sanding were followed by a high-build primer, more sanding, and a final paint job by resident boat builder, Greg Bull.

Jan expects STRINGS, with its relatively small rig, will really fly in heavy air. Of course, STRINGS has yet to be sailed. The mast and roller-reefing boom are still under construction as we go to press. Also on Jan’s list of things to do is design and build a masthead float with 600 lb of displacement for the top of the 34′ 6″ mast. 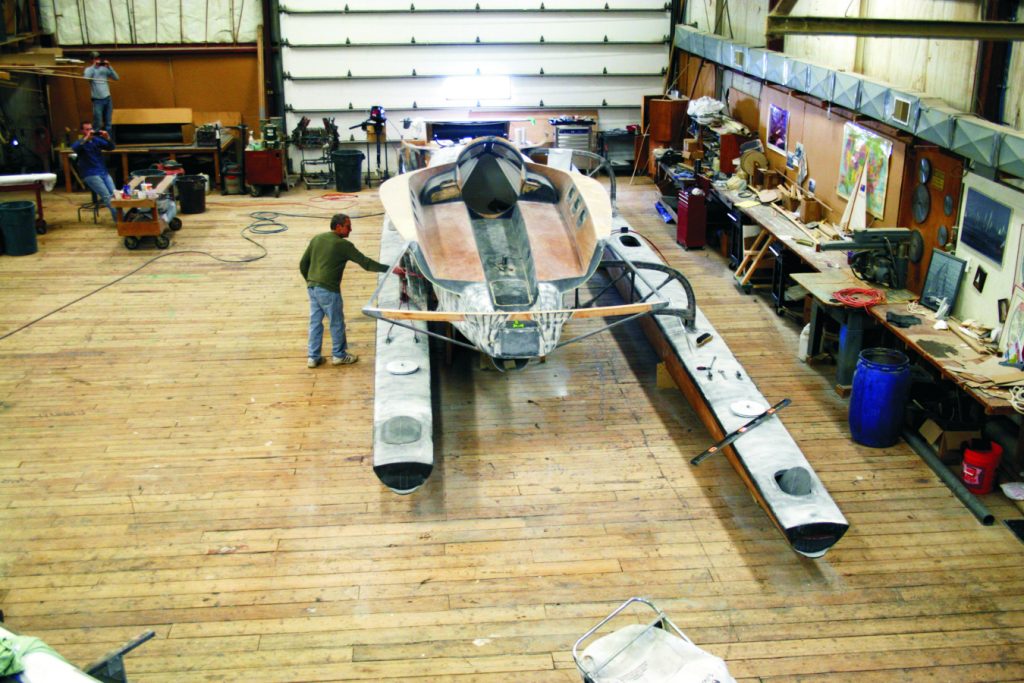 One of the many details on what Jan calls the most complicated boat he’s ever built. Three lines control each pair of intake and exhaust bailers(that’s twelve lines to control four tanks). A pressure gauge measures the depth of the water in the ballast tank and gives a quick read of the level from the cockpit. 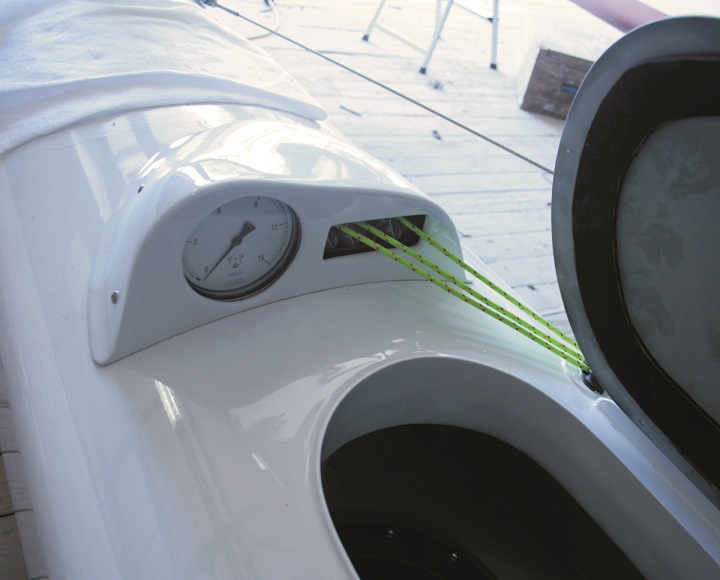 Finally, the day before launch, all components are painted and assembled. No longer Project X, STRINGS has her name and numbers. Hardware is installed and functioning. She is ready to be dropped onto her trailer for her short move out to the crane next to the slip. 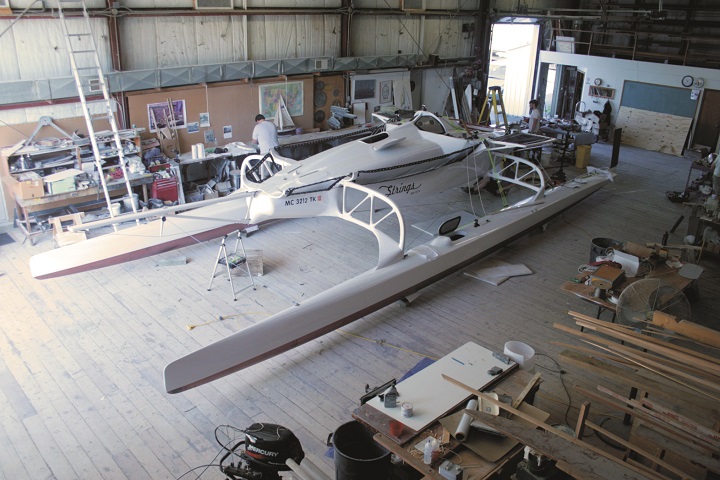 STRINGS is a little bit like Nathanael Herreshoff’s Amaryllis—the first catamaran sailboat patented in the US, way back in 1876. Herreshoff’s design- with long, narrow hulls and a center cabin that road out of the water- was so forward-thinking and effective that it was banned by the New York Yacht Club. Jan thinks he and Herreshoff would have gotten along just fine.