Lesson 3 in our series on Strip Planking

Designing and constructing a successful skeg for Sparks (our 30′ hybrid electric launch featured in Epoxyworks 32) took some head-scratching. But in the end, it was just another combination of wood and WEST SYSTEM® epoxy. Our skeg needed to be functional and age gracefully, yet be reasonably quick and easy to build and install. This project was an ideal opportunity to explore the limits as well as the advantages of combining wood with epoxy to engineer simple solutions to complex problems.

A traditional wooden skeg is assembled from timbers held together with bolts or drift pins. This large mass of wood is free to expand and contract around the bolts as the moisture content changed. If after a number of wet/dry cycles the joints failed to close, driving in caulking will tighten it up again. Effective, but it required staying on top of the maintenance.

We needed to build a skeg that wouldn’t move or require the maintenance of a traditional skeg. After two seasons in the water, there is no sign of stress or joints showing through on our skeg. I am happy with it and would build one this way again.

Overcoming movement in a large mass of wood is not all that simple. From experience with Puffin, our 24′ strip-plank/epoxy William Garden designed catboat/motor sailor, we knew that covering a stack of 3/4″ mahogany with epoxy and fiberglass cloth was not all there was to it. Every time we hauled Puffin out, the glass on the skeg would have split in a different place.

This tells me that the power in a large mass of wood cannot be ignored even if the wood has been well sealed with epoxy and reinforced with glass cloth. We can either provide the wood a controlled way to move as the old-timers did or take the power out of the wood so that any movement is canceled out.

The shape of our skeg dictated how it would be built. Sparks’ Designer Steve Killing asked how thin we could build the skeg to get the cleanest flow of water to the prop and rudder. I told him to draw the perfect skeg and we would figure out how to build it. I was worried about drilling a hole for the shaft tube and coming out the side, thin or not. There would be a lot of work invested before that hole was drilled. We also had to make sure the hole was well sealed from the inside.

Our skeg went together much like a ship’s model with the lift shapes taken on the butt lines rather than the waterlines. The shape of the Douglas fir layers or ‘lifts’ is 5/8″ butt lines taken out from the centerline. This simple method of building up shaped layers solved all the engineering problems and greatly simplified shaping and keeping both sides symmetrical. The alternating grain direction of the layers balance any movement across the grain. The longitudinal fibers contribute strength and stiffness where it would do the most good. The bonus was that we could build the shaft tube into the structure and I could stop worrying about drilling and sealing that long hole.

Assembly began with cutting to shape and laminating the center three layers. Once glued together on a flat bench, it was stiff enough to hold its shape supported on sawhorses for the convenience of fitting the additional layers. A few screws were used to hold the pieces together as the structure was being assembled dry. When we glued the pieces together, the screws guided them into the original position. This kept them from sliding around when the clamps were tightened.

Note: It’s important to drill pilot holes if using screws to apply clamping pressure. The screws should pass through the first layer without friction so what you feel through the screwdriver is the two layers being drawn together. This control is handy on thin laminations where the bite of the screw is minimal and stripping is a good possibility. If a screw is simply driven through the two pieces, the odds are 50/50 that it will strip out in the second piece first; they won’t have been pulled together and all you’ll have is another hole to fill.

An advantage of fitting all the pieces together dry was that we could use the first layer as a guide for trimming additional layers. All the thought and care went into laying out and shaping the first layer, and the remaining layers were cut roughly oversize on the band saw, screwed into position then trimmed en mass. To do this, we used a straight router bit with a pilot bearing following the first layer. 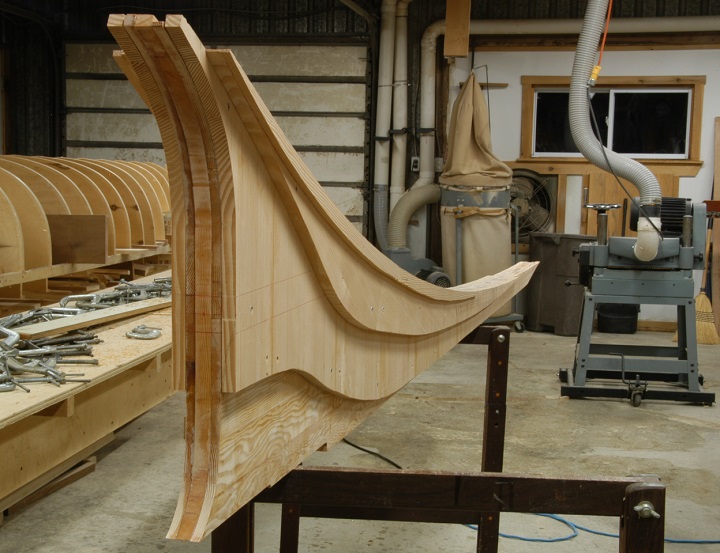 Our skeg went together much like a ship’s model with the lift shapes taken on the butt lines rather than the waterlines. 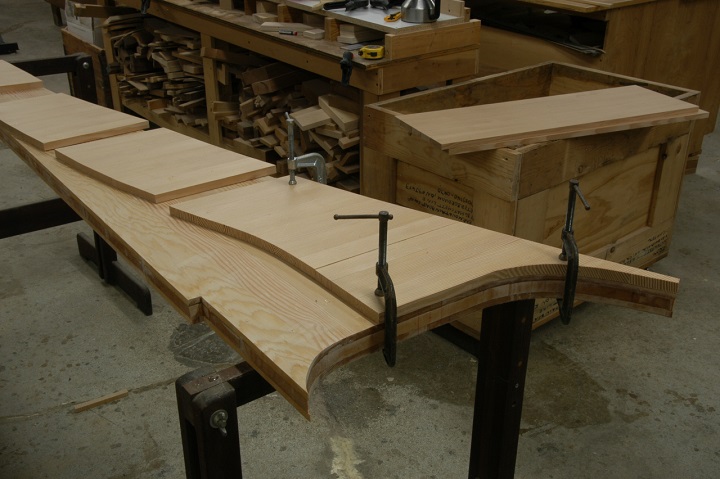 Once glued together on a flat bench, the skeg was stiff enough to hold its shape supported on sawhorses for the convenience of fitting the additional layers. 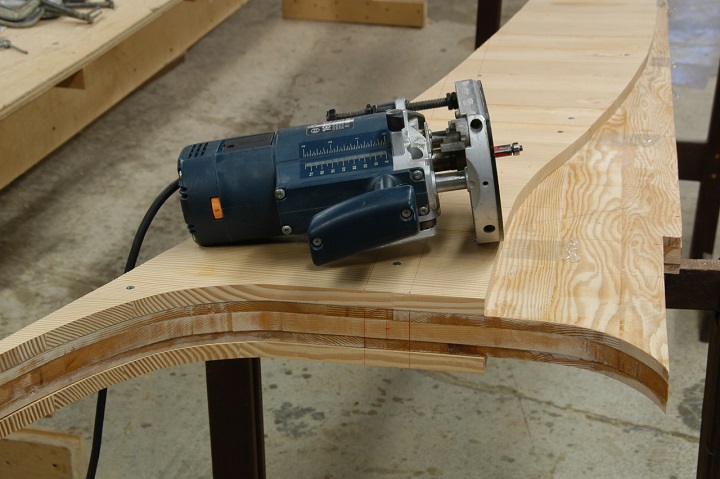 We used the first layer as a guide for trimming additional layers using a straight router bit with a pilot bearing.

After shaping and fitting all the skeg pieces together dry, we removed the loose pieces down to the core. The combined thickness of these three layers are the diameter of the shaft tube, so two straight cuts through the core were all it took to make space for the tube. This simple step eliminated all the suspense, calculations, jigs and tools needed to drill the hole and seal it. 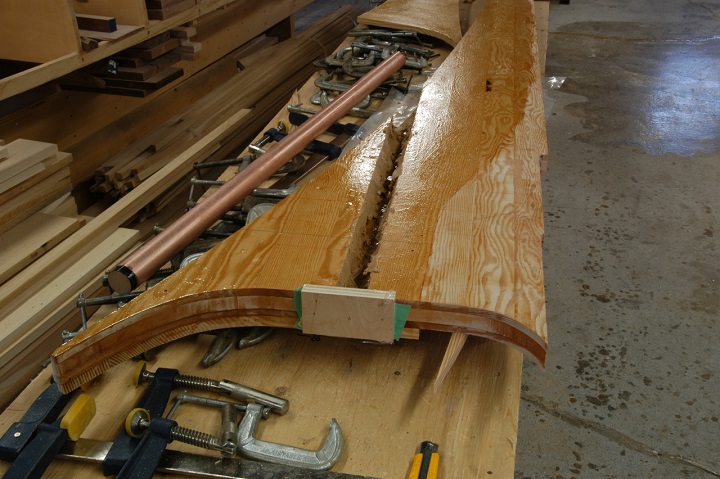 Two straight cuts through the core were all it took to make space for the tube for the propeller shaft. 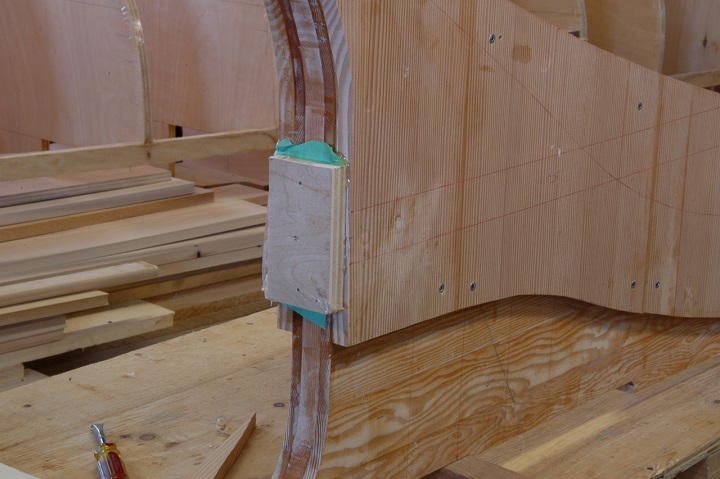 We reassembled the core by gluing the first layer on one side using the screw holes as a guide. 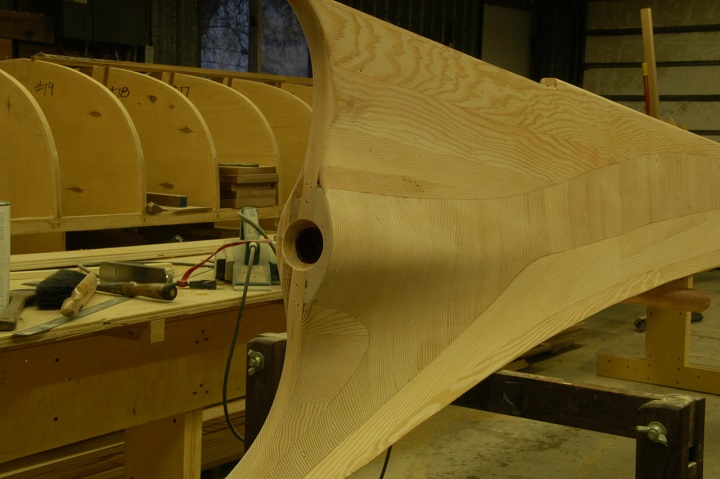 Changes in grain direction and glue lines complicate the use of hand-cutting tools, but are indispensable as guides to keeping the skeg’s curves fluid and the sides symmetrical.

To get started, we reassembled the core—now in two pieces—by gluing the first layer on one side using the screw holes as a guide. To accommodate the stern bearing, a mold of the space it would occupy in the skeg was fitted. The plugged end of the copper shaft tube fit up to the mold so that when it was removed later, the cavity was sealed, finished, and ready to go. Arriving at the final shape began with removing the bulk of the material with planes, chisels and disc sanders then finished with a cabinet scraper. A downside to laminating is that changes in grain direction and glue lines complicate the use of hand-cutting tools. On the other hand, they are indispensable as guides to keeping the curves fluid and the sides symmetrical.

Squaring up the skeg’s corners

Sparks was to have a continuous stainless steel stem band ending in a support for the rudder. Before glassing, the edges of the stem and keel had been rounded over to make it possible to wrap the glass around the edge and overlap down the centerline. This would leave us with a round corner under a rectangular stem band. To make up this space gracefully, we filled it in with a mixture of epoxy resin thickened with 403 Microfibers and sanding dust.

For a mold, we used a wooden batten cut the same width as the stem band and covered with plastic packing tape. Fiber tape held the mold in position. Filling required two steps to work around the tape, but this was better than using temporary screws and filling in holes later. To keep the edges crisp, we left the mold in place while sanding the filler. The filler was then buried under the final two coats of epoxy. 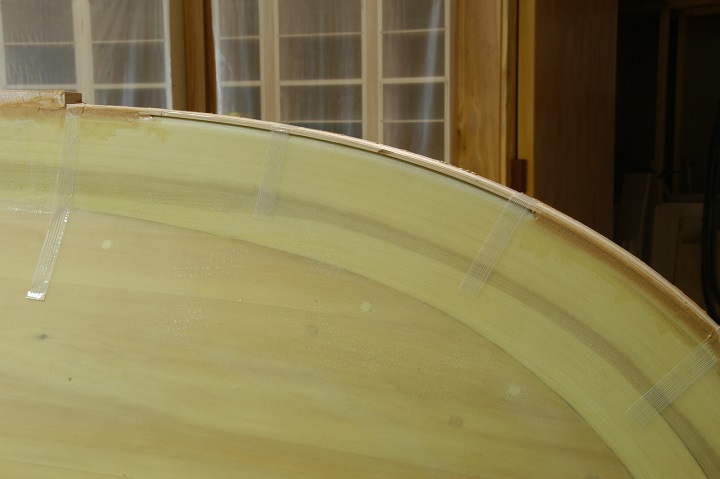 For a mold, we used a wooden batten cut the same width as the stem-band and covered with plastic packing tape. 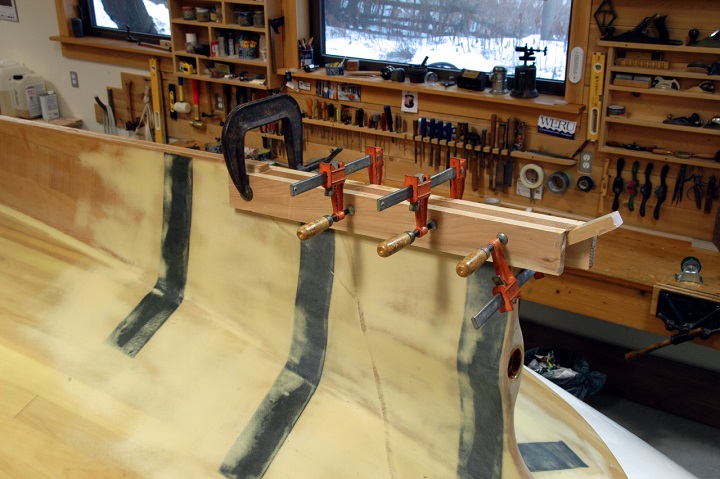 We used a mold for the sides to simplify fitting the 3/4″ × 1″ support for the rudder, which was important that it be installed level.

To simplify fitting the 3/4″ × 1″ support for the rudder, finishing at the stern took a little more precision. Having a machined bushing in the end, it was important that it be installed level. Here we used a mold for the sides. This allowed the mold to be leveled and the filler was simply scraped off to the top of the mold.

These are just a few more ways that thinking lazy has worked for us. Look for more Cheap Tricks in a future issue of Epoxyworks.