By Grace Ombry and Ben Gougeon

Here at the Gougeon Brother’s Boat Shop Meade and Jan Gougeon are preparing for another attempt at the Everglades Challenge, a race Meade calls “A true aquatic adventure.” The expedition-style race covers about 300 nautical miles over a maximum of eight days. It’s a grueling challenge; roughly 40% of starters ever make it to the finish line.

The Everglades Challenge Rules are Simple

Many types of boats are entered in the race. Some participants choose canoes or kayaks, others use small sailboats. Many contestants design their own crafts. There are no specific rules pertaining to which type of boat one may choose, but the race itself is a limiting factor. In order to be successful, the boat must be able to perform well in the shallow coastal waters of Florida. It must also be seaworthy and venture many miles into the Gulf of Mexico. The vessel must be small enough to pass under a 10′ bridge on the way to one of the checkpoints and be carried onto land. Aside from these natural limitations, anything goes. If you can dream it, buy it, or build it, you can race it. 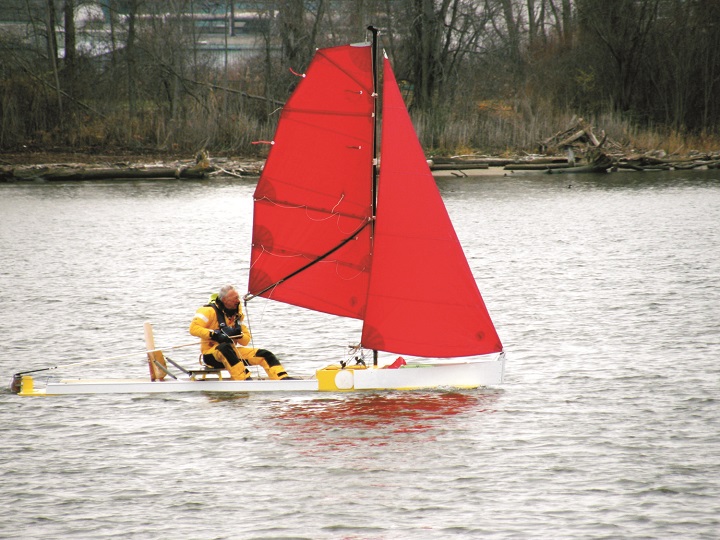 Meade Gougeon took Yello Thing for a test run on the chilly Saginaw River in preparation for the much warmer 2010 Everglades Challenge.

In 2010, Meade attempted The Everglades challenge. He’d built a small scow surfboard originally designed for fishing in the shallow waters in and around Tampa Bay. This “boat,” affectionately known as Yello Thing, was designed to be propelled with a pole or a paddle. Meade was amazed at the boat’s stability and efficacy and immediately recognized its potential as a sailboat. It was not long before this 16′ × 3′ surfboard had a reef sail, a jib, a spinnaker, a leeboard, and a rudder. 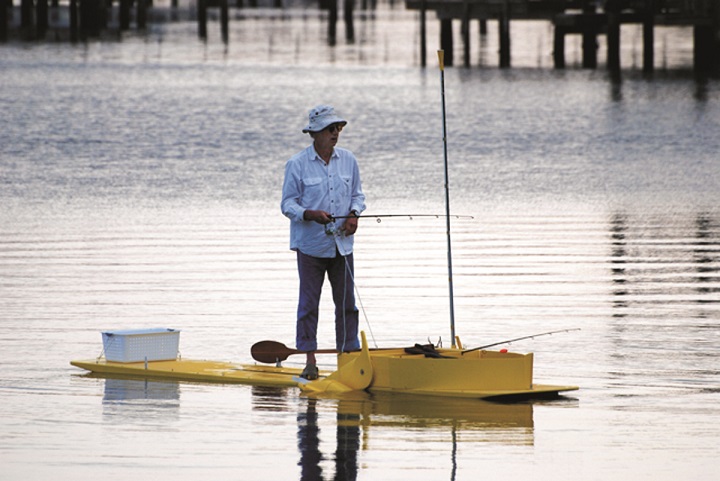 Meade aboard Yello Thing. See “The Little Scow That Couldn’t” below for details.

After a few sea trials, Meade decided Yello Thing would be a good boat to enter in The Everglades Challenge. He outfitted the boat with an auto-pilot steering system and designed a bench-like structure that allowed for a seat that traversed along its width for added hiking leverage. He then added some compartments in the bow and stern to store food, gear and safety equipment.

The sea trials were performed in moderate weather with light breezes and up to three-foot waves. As all sailboat racers know, good conditions seldom remain throughout an entire race. Shortly after The Everglades Challenge began, Meade recognized some problems with Yello Thing. Offshore in the open Gulf, Meade found himself in unexpected 25 mph winds and eight-foot waves. The auto-pilot steering system, which worked expertly in calmer seas, simply couldn’t handle these conditions. Meade was forced to hold Yello Thing on course manually.

“My claim to fame in sailing is that in over fifty years nobody has ever had to come rescue me, not once,” Meade said. “Due to physical exhaustion, I was dangerously close to wrecking my record. At 40 years of age it would have been possible but at over 70, there was no way.” After a few capsizes Meade wisely chose to head for the shore and withdraw from the race, having logged about 80 miles. At least four other boaters were not so lucky and needed rescue.

Beyond his unexpected difficulties with Yello Thing, Meade said the main hardships of the race were cool weather, water temperatures of only 62°F, insects, and obstacles in the shallow waters. He wanted to enter this year’s race but didn’t want to run it singlehanded again.

Meade is set to avoid some of the hazards of the inland routes in the 2011 Everglades Challenge with his new boat, the i550 Hot Canary, which has offshore sailing capabilities. Hot Canary is large enough to accommodate Meade and his co-captain, brother Jan Gougeon. Sleeping aboard will save them the time, trouble, and equipment required for onshore camping. (See Hot Canaryfor details.)

Hot Canary’s offshore capabilities should help Meade and Jan avoid a few of the hazards of the inland route, such as alligators. The name Hot Canary pays homage to a yellow DN iceboat of the same name which Meade raced in the 1960s.

The Everglades Challenge is organized by WaterTribe, led by of Chief Steve Isaacs. The group’s stated purpose is “…to encourage the development of boats, equipment, skills, and human athletic performance for safe and efficient coastal cruising using minimal impact human and wind-powered watercraft based on kayaks, canoes, and small sailboats.”

The first checkpoint is in Placida, Florida. Hazards on the way to Checkpoint One include rough water, a powerful tide out of Charlotte Harbor, large tarpon fishing boats, boats drifting through the pass, and boats running the pass to get in front of the drifting boats.

The second checkpoint is in Chokoloskee, in Florida’s Everglades National Park. Racers must watch for strong tidal currents, especially through the mangrove channels where unpredictable currents run at 2 to 3 knots. The water levels drop and rise, exposing or covering sand and mud bars. Large boats cruise this channel, and some run at night with no lights. Although Checkpoint 2 can be difficult to approach, many kayaks, canoes, motorboats, and sailboats frequent this entrance, it is doable.

The third checkpoint is Flamingo, Everglades National Park, Florida about 60 miles up the coast from Indian Key Pass. The hard part is over, although tides will remain a challenge and racers must avoid bigger boats on these waters.

The Little Scow That Couldn’t 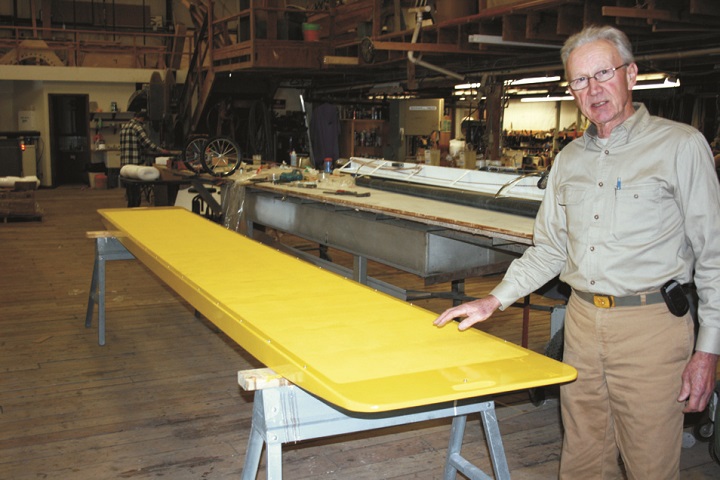 Yello Thing began life as a simple surfing scow that Meade could pole around the shallows for fishing. 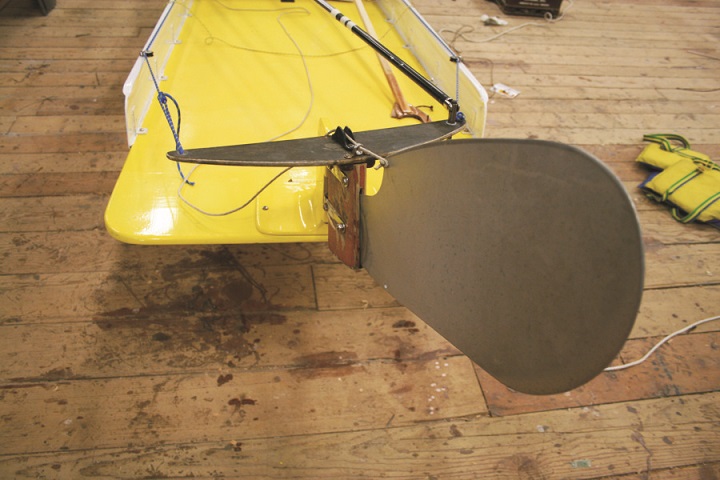 When the idea of paddling 300 miles in a competition arose, sails looked like a good idea. A kick-up rudder was also added. The prospect of higher seas meant higher sides and the yellow thing, piece by piece became Yello Thing. 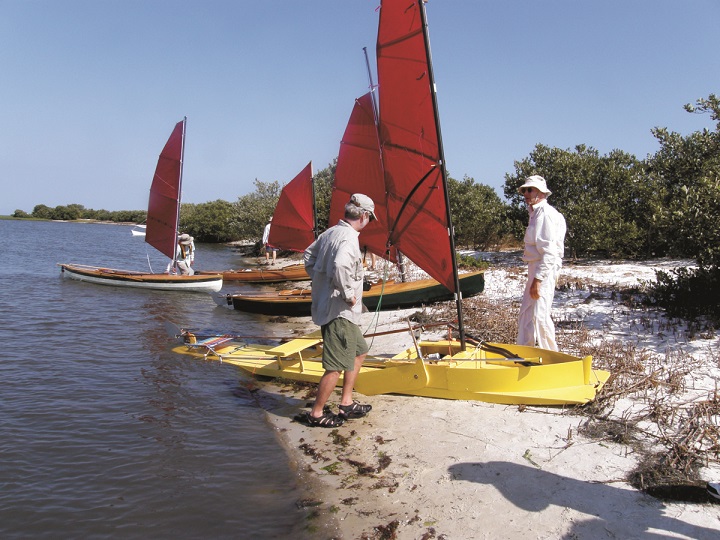 It’s true Yello Thing didn’t finish the Everglades Challenge. But transforming a simple surfing scow into a full-blown screaming yellow racing machine was a challenge. One that was met head-on with passion, ingenuity, and WEST SYSTEM Epoxy.